Congress is trying, again, to end hunger in the military (Roll Call)

This article originally appeared in Roll Call on September 29, 2021. 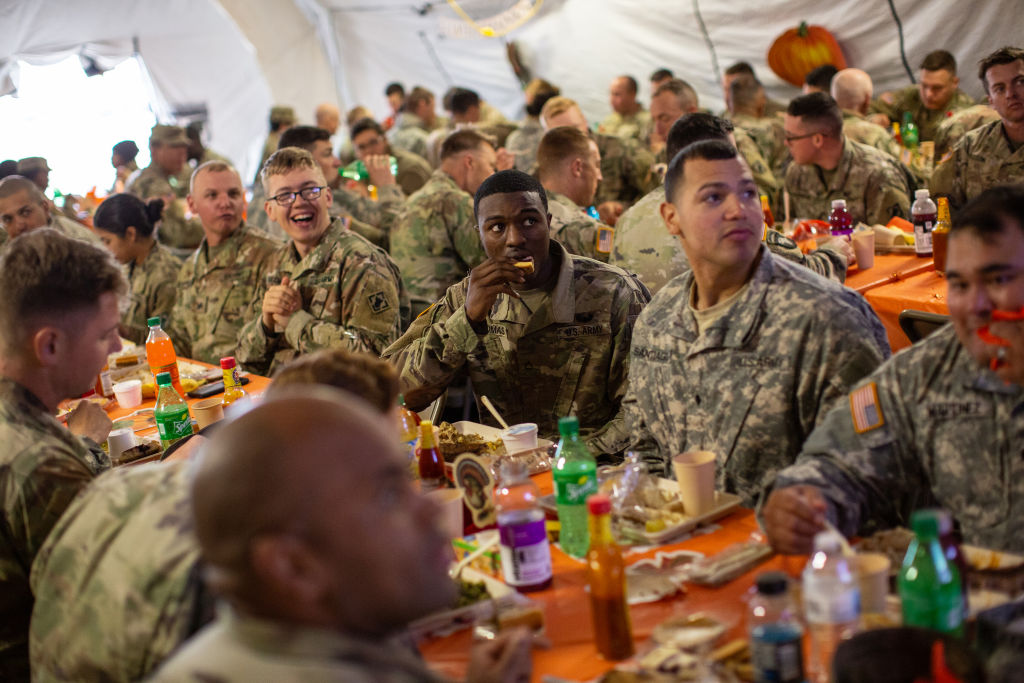 In 2016, Erika Tebbens was living outside Seattle, one of the most expensive places in America, trying to feed a family of three on her husband’s enlisted sailor’s salary of less than $25,000 a year.

Tebbens said she did not qualify for Agriculture Department nutrition assistance because of a rule that military personnel include in their income any housing allowance they receive. That same rule was a big reason a Pentagon poverty assistance program that started in 2000 failed to help many servicemembers and was discontinued in 2016.

Tebbens said she managed to afford groceries by putting bills on a credit card, borrowing money from family and requesting grocery gift cards as presents.

Five years later, Congress is trying again to conquer poverty in the ranks. Provisions in both the House and Senate versions of the annual defense policy bill would create a “basic needs allowance” aimed at doing that. But whether it reaches more of those in need than past efforts will depend on how lawmakers decide to treat the housing stipend.

The National Defense Authorization Act passed by the House last week, as well as the version awaiting a Senate vote, would require that one servicemember per family receive an allowance equal to the difference between the servicemember’s salary and 130 percent of the poverty line for that member’s region and family size. It could help people in the position Tebbens found herself in, especially if the housing allowance is excluded from salary. The House version would exclude it.

The Senate version is silent on whether to consider the housing stipend.

The House bill would pay an average of $400 a month to 3,000 military families, according to the Congressional Budget Office, which has yet to score the Senate bill.

The annual cost of the House provision would be just over $14 million a year, which some are calling “decimal dust” in an annual defense budget of three-quarters of a trillion dollars.

But the problem of poverty in the military may be much bigger than that. If a 2019 survey of thousands of military personnel by the Military Family Advisory Network is correct, then more than 125,000 active-duty U.S. military personnel, plus their family members, could be suffering from hunger.

If the total is even a fraction of that, it is still unacceptable, several lawmakers told CQ Roll Call in statements.

“It’s our responsibility to ensure that those families, at the least, have access to the support they need to lead healthy, food secure lives,” said Jimmy Panetta, an Armed Services Committee member who wrote the House provision.

Panetta’s fellow California Democrat Jackie Speier, chair of the House Armed Services Personnel Subcommittee, said: “None of our brave servicemembers or military families should go hungry or have to resort to food pantries or food stamps.”

Democrat Tammy Duckworth, who is an Armed Services member and an Army combat veteran, offered a similar provision to the Senate bill, but the version the Senate Armed Services Committee approved in July omitted her language to exclude housing payments from income.

Duckworth has said her experience as a child, when her family had to rely on nutrition assistance, has motivated her to combat hunger in the ranks.

Marsha Blackburn, R-Tenn., another member of the Senate Armed Services panel who has championed the basic needs allowance, said that worrying that a paycheck might not cover a family’s food bills is “the last thing our servicemen and women should be concerned about.”

Given that some version of a basic needs allowance is in both the Senate and House versions of the NDAA, its enactment appears likely. It would be the first such program in the military since the demise five years ago of the Family Subsistence Supplemental Allowance, which Sen. John McCain, R-Ariz., shepherded into the fiscal 2001 NDAA in 2000, decrying a “food stamp Army.”

The problem never went away, and even worsened due to the pandemic as many military spouses lost their jobs.

This year, the House NDAA included a basic needs allowance for the third straight year. This is the first time the Senate has followed suit.

Assuming the Senate retains the version approved by its Armed Services Committee, a House-Senate conference will decide whether to include the housing allowance in determining how many servicemembers qualify.

Including the housing assistance in the income total is the issue that kept Tebbens from receiving aid under the Agriculture Department’s Supplemental Nutrition Assistance Program (SNAP), formerly known as food stamps. She is not alone, as only a few thousand military families qualify for SNAP.

Jennifer Goodale, director of military family policy at the Military Officers Association of America, a group that advocates for servicemembers and their families, said the organization is encouraged that the basic needs allowance is in both NDAAs but has concerns about the Senate approach.

“Those who need the support most should not have their housing allowances included in the poverty line computation, as it may result in junior servicemembers and their families losing out,” Goodale said.

President Joe Biden, in a statement of administration policy on the House bill, expressed support for a basic needs allowance but said the question of whether to include the housing payments requires study.

The housing allowance helps military personnel who live off-base defray those costs. But the federal government is inconsistent on whether to count it in income tallies for purposes of determining eligibility for aid. The IRS does not require that it be included in taxable income, nor does the WIC program that provides nutrition assistance for women, infants and children.

Josh Protas, vice president of policy at MAZON: A Jewish Response to Hunger, a group involved in developing the basic needs assistance proposal, called the Senate provision “an empty policy change” if it counts the housing allowance as part of a servicemember’s income.

Some members of Congress — including Rep. Mike D. Rogers of Alabama, the top Republican on the Armed Services Committee — are also discussing another, arguably more direct way to deal with the problem: increasing pay for lower-ranking enlisted personnel.

The 2019 Military Family Advisory Network study surveyed 7,785 military personnel, including nearly 4,000 on active duty. It found that 9 percent of the active-duty personnel could be going hungry.

With about 1.4 million Americans serving in the active armed services, tens of thousands of people are potentially affected.

The fiscal 2020 NDAA required the Pentagon to tell Congress the extent of food insecurity in the ranks, including how many servicemembers or their dependents are receiving nutrition aid, eating reduced-price school meals or using food banks. The report was due in May 2020 but has yet to arrive.

The Government Accountability Office recommended in 2016 that the Pentagon start collecting the data. The Defense Department later told GAO that only a “very low percentage” of troops were having trouble feeding their families.

Still, anecdotal evidence supports the contention that many military families are living on the edge. Protas points out that food pantries operate on or near virtually every military base.

And those who’ve experienced the strain, like Tebbens, say it’s past time for Congress to help.

“As a military family, you should never have to be in a position to have to worry about how you’re going to put food on the table,” she said.