This article originally appeared in the Jewish Herald-Voice on July 15, 2021. 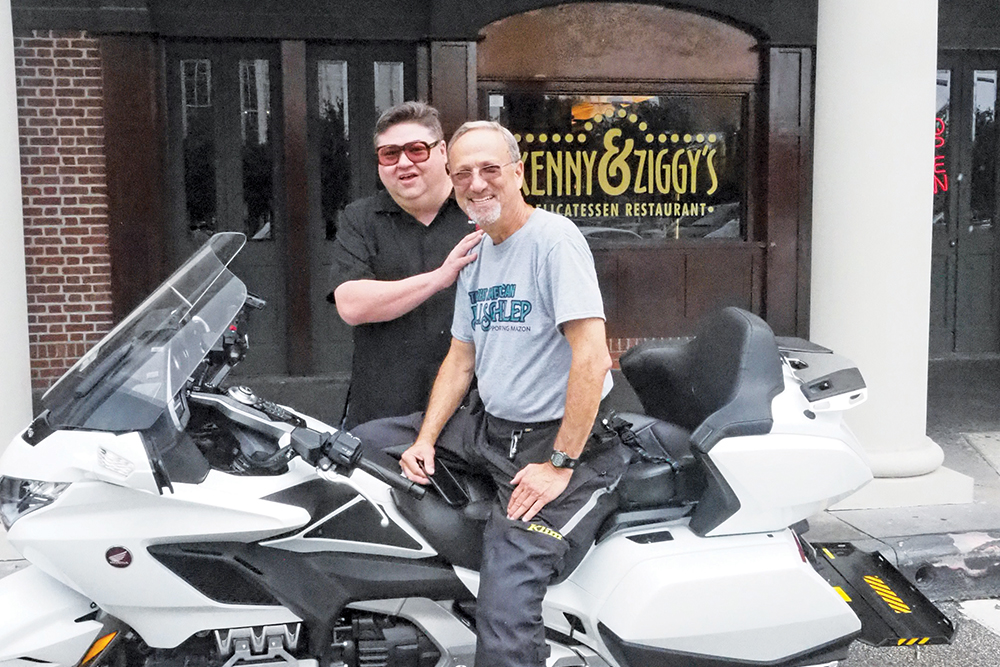 Halfway through a 75-day, 16,000-mile motorcycle tour across the United States, Steve Goode stopped at Kenny & Ziggy’s N.Y. Delicatessen for a bite to eat and a conversation on eliminating hunger.

Goode is partnering with MAZON in its “Jewish Response to Hunger” for this summer’s Great American Deli Schlep, visiting 42 delis in nearly every U.S. state to raise awareness for those in need.

Greeted by Kenny & Ziggy’s owner, Ziggy Gruber, Goode was full of energy and enthusiasm at the Post Oak restaurant on Thursday, July 8. He also was inspired by what he saw on the first half of his journey.

“We are a wealthy country,” Goode told the JHV. “Our cities, our roads, we built all of it, and if we can do that, we can end hunger in America.”

There are 80 million Americans MAZON considers food insecure; i.e., in the last month, these Americans did not know where their next meal was coming from.

“Being Jewish means we have a responsibility to make the world a better place,” Gruber told the JHV. “MAZON is a leader in addressing the need to end hunger nationally and internationally. The work Steve is doing is amazing. We are honored to be associated with MAZON and Steve.”

Goode, 66, who has served on the board of his Reform synagogue, B’nai Jehoshua Beth Elohim in Deerfield, Ill., and helps organize the Greater Chicago Jewish Festival, has been in love with motorcycle touring since high school.

Kenny & Ziggy’s was the 26th of 42 Jewish delis Goode is visiting – from Maine to California – during the Great American Deli Schlep.

“Every deli I stop at has its own personality, and Kenny and Ziggy’s is a great example of places with a unique sense of character,” Goode said. “If we did not have such diversity, we would all be eating the same fast food.”

To support the Jewish Response to Hunger, go to mazon.org/delischlep.