People of the bike: Jewish motorcyclists who ride hogs and mow down stigmas (Times of Israel)

This article originally appeared in The Times of Israel on July 3, 2021. 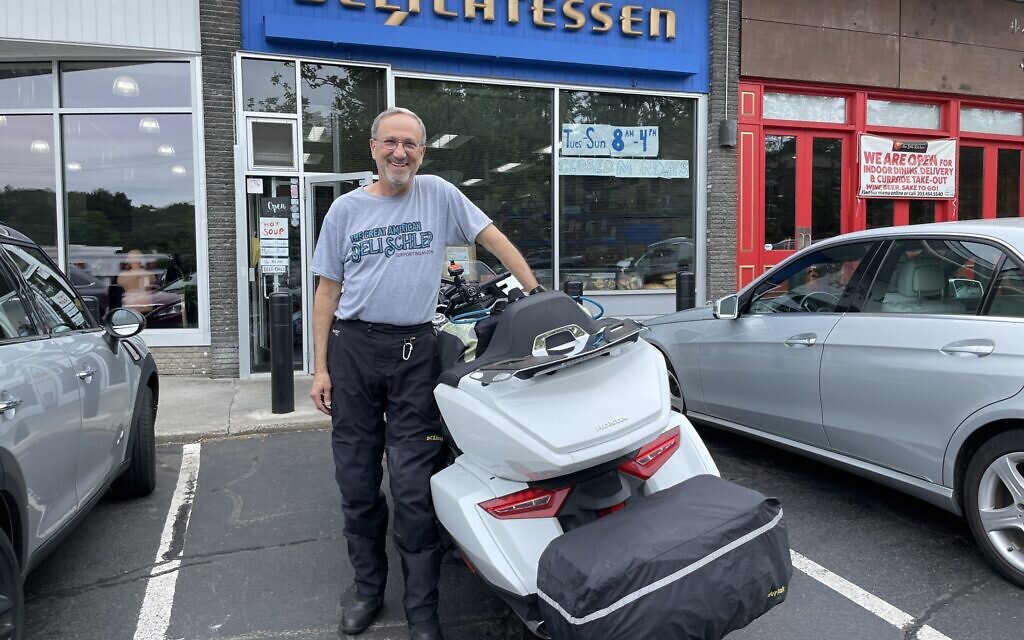 WESTPORT, Connecticut — A year after “Easy Rider” came out, Bruce Ente bought his first motorcycle. It was 1970 and Ente, then aged 19, decided what he needed was a Honda CB350. So he spent his bar mitzvah money to make the purchase.

“I just got this idea that I wanted a bike,” Ente, treasurer of the Jewish Motorcyclists Alliance (JMA), told The Times of Israel via Zoom from his home in Oberlin, Ohio.

Ente was studying at the Hebrew University of Jerusalem at the time. So he and his two friends each bought a bike, depleting the shop’s entire motorcycle inventory. After they finished the semester they shipped their bikes from Haifa to Greece, and then on to the United States.

When Ente told his parents, they weren’t pleased.

“A nice Jewish boy riding a motorcycle? Most people think motorcycles and Jews are oxymoronic,” said Ente, a retired research psychologist. “But the reality is that Jewish men and women are no less intrigued and fascinated about motorcycles than any other person. We are victims of our own mythology, that people of the book can’t be people of the bike.”

After Ente returned home, he sold his CB350 to a fellow student at Oberlin College and Conservatory. Today he rides a Yamaha FJR1300, which is a sport touring bike.

Ente is deeply involved in his local community and is a member of two Jewish motorcycle groups — the local chapter of the Shul Boys and the JMA. And while the JMA’s unofficial motto might be, “Eat to ride, ride to eat,” its deeper credo is about nurturing community.

“We eat and have fun, but we have a bigger purpose of teaching ‘Never Again.’ And beyond the Holocaust, it’s about expanding diversity and inclusion and tolerance,” said Ente. “We have an obligation as Jews to use the experience of our people to help other people.”

The JMA — which is essentially a club of clubs — was founded in 2004 after several Jewish clubs arranged a meet and greet at Mike’s Famous Harley-Davidson in Delaware. The event inspired the JMA’s creation as well as the idea for Ride 2 Remember, an official ride in memory of the Holocaust.

Today the JMA holds rides and meets to promote educational and charitable activities benefiting the wider Jewish community and broader non-Jewish community. Over the past decade, it has raised about $400,000 for Holocaust centers in the United States and Canada. Additionally, the JMA and its member clubs frequently gather to assemble care packages for the food insecure, celebrate Jewish holidays such as Sukkot, or visit seriously ill children at summer camps.

The JMA now has 42 member clubs in the US, Australia, Canada and Israel. There are the Shul Boys and the Chai Riders, Hillel’s Angels and The Tribe. Some are religiously observant while others are secular. Members include dentists and doctors, rabbis and cantors, teachers and veterans, accountants and software engineers.

Of course, as in all families, disagreements arise. To help maintain harmony, there are rules, said JMA vice president David Rosenblatt in a Zoom interview from his home in Shaker Heights, Ohio.

If members wish to debate they can do so on a private page on the JMA website, he said.

In the Tri-State area, members of the Chai Riders meet for dinner once a month at a kosher restaurant.

Every summer the club’s female riders go to Camp Simcha in upstate New York where they spend time with the campers, who are seriously ill. The male riders visit Camp HASC, for children who are developmentally disabled. Toward the end of the summer, the club visits two camps run by the nonprofit OHEL Children’s Home and Family Services.

While treasurer Secular isn’t observant, she’s found the closeness and camaraderie of both the Chai Riders and JMA inspiring.

“The most important shul is the one you don’t go to,” she said, using the Yiddish term for synagogue.

Secular got her first taste of the motorcycle life when she hitchhiked to the beach as an 18-year-old.

“Picture the puppy sticking his head out the car window. That’s what riding is like; the freedom, the wind. Your mind is clear, it’s relaxing. It’s you and the bike,” she said.

Secular bought her first motorcycle in 1984, about a year after that first ride as a passenger. While she no longer rides that bike because “I don’t have a 19-year-old body anymore,” she still owns it, along with five others.

This September, Secular will join hundreds of other motorcyclists for the annual Ride 2 Remember. The ride will return this year to Whitwell, Tennessee, home of the Paper Clips Project which saw middle schoolers create a Holocaust memorial that eventually gained worldwide attention.

Like Secular and other JMA members, Steve Goode of Deerfield, Illinois, also sees motorcycles as a way to spend time riding for pleasure and for a purpose.

Goode met with The Times of Israel at Gold’s Delicatessen in Westport, Connecticut, on June 12. He was just about a week into The Great American Deli Schlep — a 16,000-mile, 75-day motorcycle ride to visit 42 Jewish delis across the lower 48 states.

Goode was riding to raise awareness and funds for MAZON: A Jewish Response to Hunger, a national organization fighting to end food insecurity among people of all faiths and backgrounds in the US and Israel.

Goode parked his 2018 Honda Goldwing Tour bike outside the 60-year-old deli long enough for a nosh and a conversation with locals about America’s hunger crisis before heading back on the road. He wanted to make Massachusetts by twilight.

With several cross-country rides under his belt, Goode, a member of the Chicago-based Chaiway Riders and the JMA, said each time he heads out he relishes seeing lesser-known sites and traveling on less-frequented roads.

“Riding a motorcycle is the closest thing to meditation I can think of and if you really want to get to know the country, you need to see the back roads of Kentucky or Arizona,” Goode said.