This article originally appeared in Roll Call on October 13, 2021. 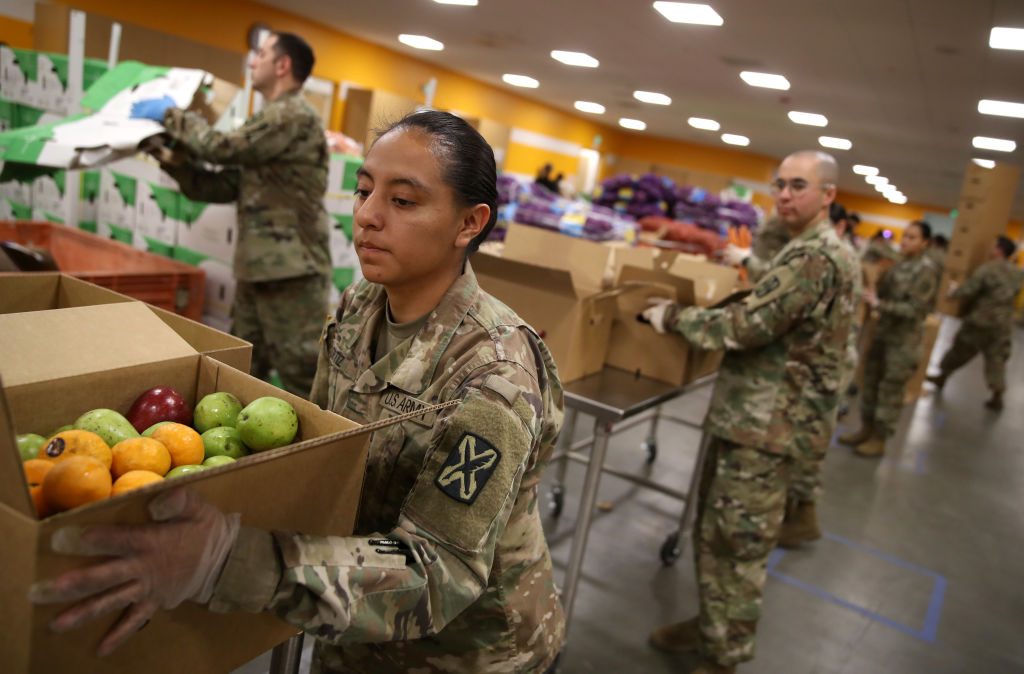 “Reports of military families who struggle with food insecurity, turning in desperation to food pantries around the country, are shocking and unacceptable,” the letter said.

Biden and a broad swath of Congress want to launch such an aid program to combat poverty and hunger in the ranks — a problem that by all accounts the coronavirus has worsened.

But lawmakers disagree on how generous to make the proposed aid, and the White House has said it is undecided on that question.

The letter’s signatories include MAZON: A Jewish Response to Hunger and other influential groups, such as the Military Officers Association of America, Iraq and Afghanistan Veterans of America, National Military Families Association, Blue Star Families and Vote Vets.

Both the House-passed version of the NDAA and the Senate Armed Services one would provide a basic needs allowance. It would cover the difference between a servicemember’s income and 130 percent of the poverty level.

But CQ Roll Call reported last month that the House bill explicitly requires that the income calculations must not include the basic allowance for housing, a stipend that about two-thirds of servicemembers get to cover the cost of living off-base or in privately operated housing on base.

The amount of the housing allowance, which is determined by a number of factors, varies. But most Army privates, for example, earned an average housing allowance last year of just over $15,000 on top of just under $21,000 in basic pay, according to the Congressional Research Service.

The Senate bill is silent on whether the new program should count the housing allowance as part of income.

The White House Office of Management and Budget, in a Sept. 21 Statement of Administration Policy on the House bill, said the administration supports the basic needs allowance but “needs a more comprehensive data analysis” on whether the housing allowance should be counted toward income under the program.

In Tuesday’s letter to Biden, the military family groups urged him to back a version of the NDAA that excludes the housing allowance from counted income in order to provide assistance to as many families as possible.

Even the more generous House bill is fiscally manageable for the Pentagon. The Congressional Budget Office reckons the House provision would provide 3,000 families about $400 a month — at an annual cost of $14 million.

Currently, a number of the bigger programs, including the Agriculture Department’s Supplemental Nutrition Assistance Program, require that the housing aid must count toward income, which renders many military families ineligible for SNAP, the advocates say.

On Thursday, First Lady Jill Biden is among the speakers slated to address a conference hosted by the House’s Military Family Caucus. The event is expected to focus partly on food insecurity in the ranks.

In addition to the NDAA bills, Bishop and Nebraska Republican Rep. Jeff Fortenberry have filed a measure that would create a new SNAP program for military families — one that would not require that housing allowances count toward income. The measure has been referred to the Armed Services and Agriculture committees.

Surveys of military personnel and their spouses suggest that thousands of them do not make enough money to purchase adequate food for themselves and their dependents.

A 2019 Military Family Advisory Network study surveyed 7,785 military personnel, including nearly 4,000 on active duty. Fully 9 percent of the active-duty respondents gave responses to a questionnaire that indicated they were suffering from hunger.

COVID-19 worsened the problem. A National Military Family Association survey found that 34 percent of spouses lost their jobs as a result of the pandemic and another 25 percent saw their hours cut as a consequence.

What’s more, the letter to Biden notes, “recent Pentagon records show that during the 2018-19 school year, one third of military children at DoD-run schools in the U.S. were eligible for free or reduced-price school meals.”